This book is about sharks, what they have meant to humans throughout the world and the ages, and what they mean to us now: the scientific discoveries made about them, the thousand ways they are killed to make commodities, and the way people start to defend them as they appear to be on their way to extinction. I chose to read it because I love sharks (actually, I plan on writing a novel about how a future anarchist society must deal with the threat caused by long-forgotten laser-sharks that mad scientists had created for the underwater mining industry before the revolution…), but I am often annoyed at the tone of documentaries about them, as even ‘educational’ ones feel like they have to take that sensationalist big man-voice to announce things like “SHARKS they evolved to be the NUMBER ONE KILLER of the sea. This APEX PREDATOR can even attack VERY BIG ANIMALS, and it could eat KILL A HUMAN IN SECONDS if it wanted to.”

(Here is a big-voice documentary that really could be worse: https://www.youtube.com/watch?v=nmvc35pnCYE )

I’m not saying I do not see sharks as killing machines, and the fact that they could severe a limb just because of whatever their brain thought it saw is quite terrifying, but I do not want to learn about sharks only to be terrified, but also to, well, learn about them.

This is not to say that Juliet Eilperin’s style is academic or boring: on the contrary, she introduces people in a quirky way that make you think of them as characters in a novel, or your awesome new friends in the world of sharks, rather than as scientists who spend years of their lives, probably their whole careers, analysing bits of dead fish. Neither does she limit her research to scientists, her approach makes her introduce you to everyone who’s involved with shark in any way, from the Hong Kong shark fin traders to the shark-callers of Papua New Guinea, and in a quite disturbing scene Rosie O’Donnell who congratulates a woman who just caught a shark with ‘Girl Power!’. And she has a love of incorporating all the bits of curious information you can wish for: did you know the word ‘shark’ probably comes from the Mayan xoc? That Fidel Castro absolutely loved the book version of Jaws and its compelling critique of U.S. capitalism? One of the darker parts of the book is about the slave trade, and the increase familiarity it brought between humans and sharks. A Scottish abolitionist, James Tytler, wrote a very short text in 1792 for the House of Lords called The Petition of the Sharks of Africa, which seems as grim as sarcastic.

Her enquiry about sharks reveals a lot about human nastiness, indeed, as well as the absurdities of capitalism. The tale of the shark-fin soup is one of those, in which species have been made endangered to procure something that is pretty tasteless and quite bad for your health, but which is a status symbol. This is my ‘favourite’ quote about commodifying sharks:

We have been hating sharks on general principles for centuries, and in some ways they have deserved it; but now it is high time that they should pay up. There are no more interesting animals in the world, and the ways and means of turning them into cash constitute one of the most fascinating of our modern industries.

What? This bit of 1928 commercial prose simply puzzles me. Juliet Eilperin, on the other hand, has a very practical approach, and points out how people act not to take revenge on sharks, and not to protect them, but because of their economic interest, and her views on the protection of sharks are very realistic, and not the word of someone who only cares about a single issue:

This doesn’t mean that there’s no societal cost: this sort of shift may cause economic dislocation, and it does mean abandoning traditions that have lasted for centuries in some cases. But it’s important to view this in context: eliminating sharks as a widely traded commodity is not the same thingas eliminating their place in global society or in the world’s economy. In fact, the most effective way of managing this transition involve redirecting our obsession with sharks into a nonlethal form of commodification. Given current economic and political realities, it may represent the most effective method of ensuring enough sharks exist so our fetishizing them doesn’t wipe them out completely.

And her consideration of the commodification of sharks does not discriminate between Chinese cuisine and Damien Hirst’s dead sharks selling for millions. Read her book. Here she is, annoying a shark: 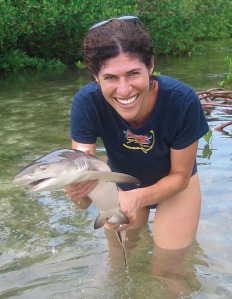 The joys of life under capitalism

As a translator, I virtually never have any money, so if you find any translation here of any use and happen to be someone who has money to spare, just leave a comment with a way of contacting you, and I can give you my Paypal details. Believe me, I won't feel insulted, however small the amount. But don't stop enjoying and sharing the translations if you don't!
Loading Comments...